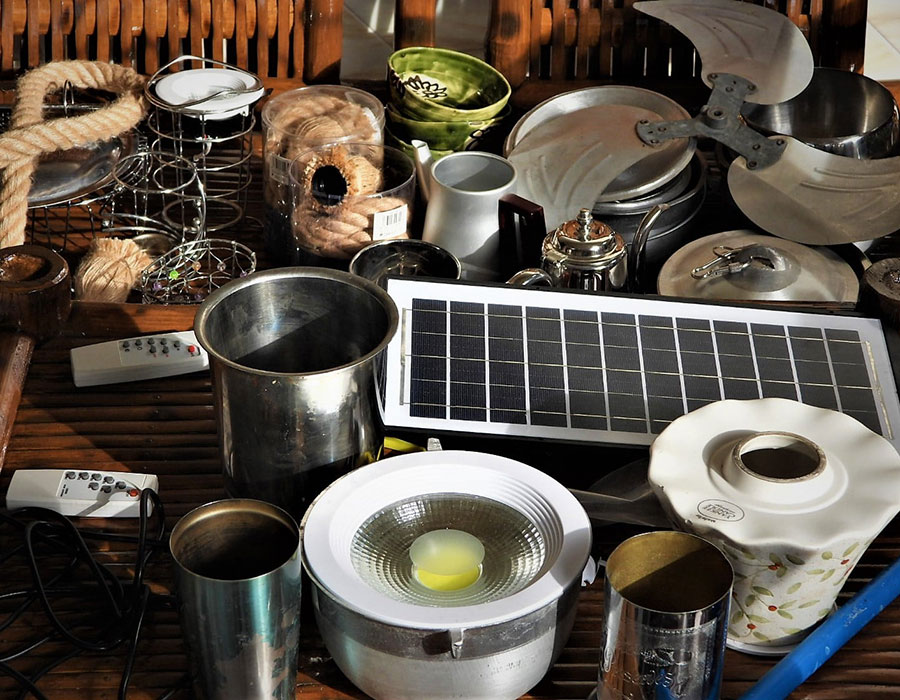 Here we go with new ideas for new lamps, we convert (almost) anything into a unique lamp for you! 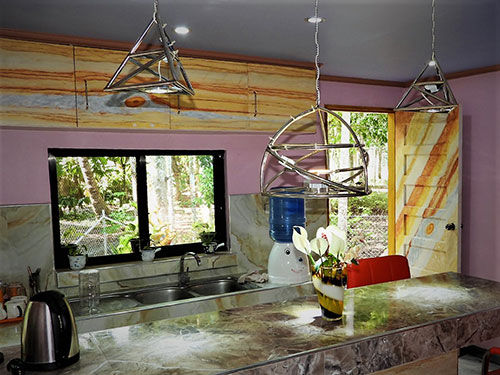 Here you can see examples of our lamps in use 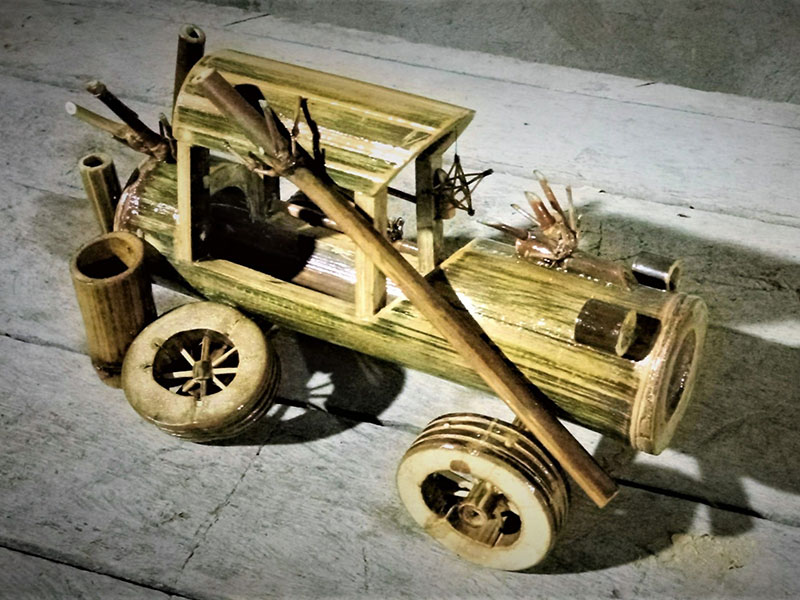 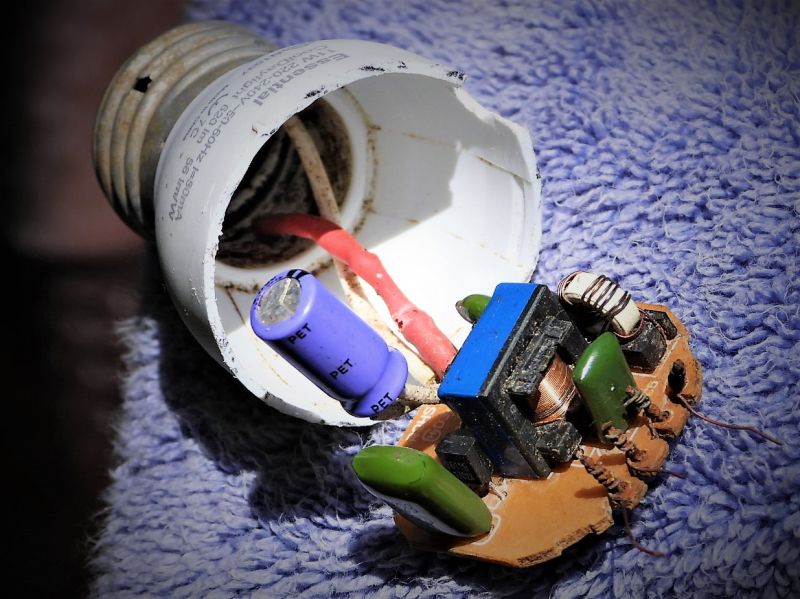 My thought on energy efficiency. Most people are proud of saving electricity by using modern lamps. But there is a but.
Compact fluorescent lamps (CFL), as seen here, also called energy-saving light, were designed to replace incandescent light bulbs; some types fit into light fixtures designed for incandescent bulbs. The lamps use a tube that is curved or folded to fit into the space of an incandescent bulb and compact electronics in the base of the lamp.
This ballast consists, in my example, of eight visible electronic components at the front and three additional components at the back of a printed circuit. Like a transformer, rectifier, resistors, condensers, and so on.
Your common sense will soon imagine that from the 11 Watt, which is written outside the bulb, a lot will be consumed to run this electronic stuff. And will not be emitted as light.
This is only needed because we are connected to a monster-grid, which works on 110V or 230 Volts AC and either 50 or 60 Hz. (Cycles per second).
Although this type of lamp was just a step towards the now fashionable LED lamps, we should be aware that both types ONLY need low voltage DC for their operation. At the four thin rusty outlets at the right of my photo. See how it is done better: https://lnkd.in/gdUDCUK 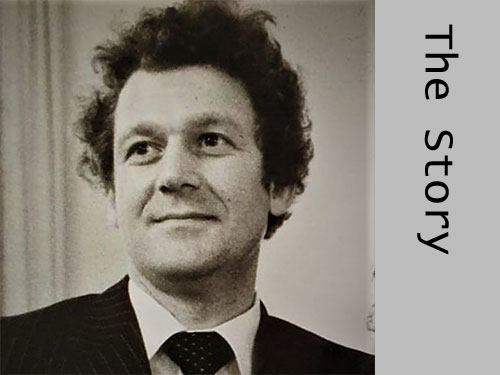 This is the story behind the HLamps = Handmade Lamps from the Philippines:

A German skilled worker was drawn abroad at an early age: In 1965, when he was in his early 20s he was already repairing radar equipment for a British company in the Arabian / Persian Gulf.
After completing a second apprenticeship, he quickly became press officer at Messerschmitt-Bölkow-Blohm GmbH (now Airbus) in Hamburg, later in Munich.
In 1990 a large German trade fair organizer discovered his skills as an organizer of joint stands on trade fair topics that needed explanation.
For years it filled entire halls at the world’s largest computer fair.
At what was then the largest industrial trade fair in the world, he founded the joint stand for hydrogen and fuel cells in 1995,
which he sold to Deutsche Messe AG in 2006.
Always looking for the right solution for supplying energy to the world’s population worldwide,
so far he has attended a total of 116 international congresses on the subject.
Publishes its own book on the subject of the Hydrogen Society and its own online energy graphics.
Through a series of almost unbelievable coincidences, in 2020 in the Philippine he found the opportunity to design and to build his own little community there.
Which will be fully energy self-sufficient in the final stage. As an example for the whole world.
The construction work was not affected in anyway by Corona, although all construction sites in the Philippine were closed in 2020.
The international marketing for the purchase / rent of the seven houses is currently failing due to the travel restrictions.
Instead, two families of craftsmen now live in the first completed houses with a total of five kids.
In order to keep the team busy, LHLamps.com now offers:
Lenogon’s handmade lamps. This is the name of the family that is involved in the design and construction of the Sunny Houses @ Samal Island with up to 16 people.
They will now design and built individual, handmade lamps for the world`s market.
Take a look at the first samples, our handmade lamps Made in the Philippines are made of metal, wood and recycled material. Or a mixture of all three components.
We are happy to build your “dream lamp (s)” according to your individual ideas and after consultation with us.

The transport costs are already included in all prices. 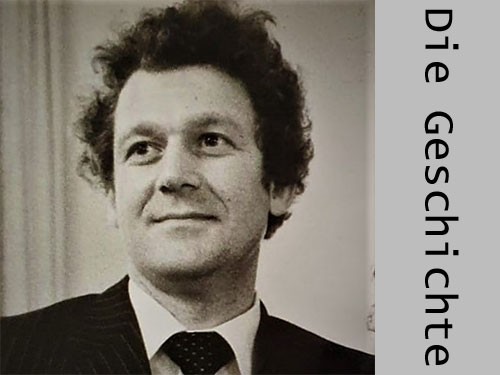